The Swiss private bank and investment firm takes another look at how, it says, investors should use the current situation to adjust asset allocation. Forward-looking markets have rallied, but this process will not last forever.

Financial markets recovered from their slide of last March after central banks pumped liquidity into the system; the rollout of vaccines in a number of countries has also cheered investors, hopeful that some kind of normality will return later this year. Before the pandemic hit, investors had been speculating that the West was at risk of a Japanese-style period of low growth and interest rates. It may be, so such commentators say, that any sharp rise in growth and markets this year should be treated as an opportunity to re-jig asset allocation before longer-term trends reassert themselves.

An organisation that has talked before about such trends is the Swiss firm, SYZ Group. It has already argued that investors should use this current period as an opportunity before the situation shifts. And it has warned about the "Japanification" of growth. Here are comments from Adrien Pichoud, chief economist and senior portfolio manager at SYZ Group. The editors of this news service are pleased to share these views; the usual editorial disclaimers apply. Jump into the debate! Email tom.burroughes@wealthbriefing.com or jackie.bennion@clearviewpublishing,com

Staggering spikes in COVID-19 cases, all-too-expected Brexit disruptions and shocking anti-democratic developments in the US kicked off 2021 with a bang. From a different vantage point, however, the beginning of 2021 can be seen as positive. Vaccines roll-outs are bringing us closer to the end of the pandemic, uncertainty around Brexit is over and a Democrat majority in the US Senate will enable enhanced fiscal support.

While the COVID-19 situation has worsened, governments have learned how to mitigate the economic impacts since the first wave last March, and we do not believe that the second tsunami of infections will derail the recovery. Crucially, vaccination is helping businesses see the light at the end of the tunnel and hold tight until things normalise.

As a result, forward-looking markets have rallied to new highs, and we expect pent-up demand to keep fuelling macroeconomic momentum. In the context of continued accommodative central banks and government support, we should also see inflation pick up from a low base. 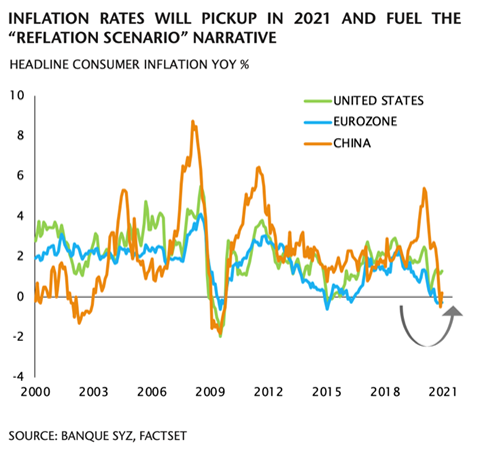 Making the most of growth
This acceleration will not be permanent, however. The long-term Japanification trend of low growth and low inflation - which does not rule out short reflationary cycles - will inevitably resume its gravitational pull on the economy towards the end of the year.

Once the recovery is well underway, perhaps towards the end of the summer, we expect governments and central banks to gradually shift their tone - highlighting economic improvements rather than downside risks. As they contemplate the withdrawal of supportive measures, markets will need to fundamentally reassess the outlook. The removal of the proverbial punchbowl can hurt assets across the board and lead investors to re-evaluate the premium they are prepared to pay for risk.

With this in mind, the current rally presents a tactical window of opportunity to capitalise on higher growth and inflation. Since we identified the potential for a return of growth in November, we have been gradually repositioning the portfolios to capture more cyclical equity exposure and less rate sensitivity. As the upward trend has been steadily confirmed by economic data, we have made a series of incremental changes – from increasing the equity allocation and reducing our quality and growth stock bias to obtaining broad-based value exposure through global exchange traded funds.

Taking cyclicality to the next level
Our confidence in imminent economic growth has increased and we are now contemplating additional moves within the equity allocation - replacing sector-neutral value and quality growth stocks temporarily with sector-specific cyclical exposure. While we will retain certain all-weather quality growth stocks, we want to benefit from the cyclical companies poised to assume market leadership.

Downtrodden commodity-related sectors, such as materials, and financials offer significant catch-up potential, and the temporary growth outlook offers a tactical opportunity to benefit from these sectors we otherwise classify as “structural losers” of Japanification. A reflation scenario should increase demand for raw materials, while financials, which have lagged structurally over the past several years, should rapidly benefit from steeper yield curves and higher long-term rates. Despite an initial rebound, these sectors are still cheap compared with others.

Core eurozone equity markets, such as Germany and France, are also attractive, given the super low-rate context in Europe, and could benefit from a global reflation scenario, as well as the Japanese market. Meanwhile, Chinese equities continue to be boosted by macro momentum and a raft of domestic support measures.

Reducing rate risk
On the fixed income side, we have also made changes to reflect the solidifying reflation scenario. As the US curve appears prone to further steepening, due to positive growth prospects and additional fiscal stimulus, we are exercising caution on nominal government bonds, especially US treasuries.

The combination of rising yields and stretched valuations across the entire credit spectrum have also led us to decrease our investment grade credit exposure, as both carry and potential for spread compression are very limited. In fact, credit spreads are at risk of widening along with rising rates. While macro and liquidity conditions are favourable, we prefer to seek opportunities elsewhere, as the potential for positive performance appears limited in a temporary reflation scenario.

Emerging market hard currency debt remains our favourite segment of the fixed income universe, as the combination of improving global growth dynamic, ample US dollar liquidity, very low rates and the recent weakening of the dollar clears the outlook for some issuers and allows us to benefit from still attractive spreads. We also continue to see value in high yield, where additional spread compression remains possible for cyclical issuers and short-dated bonds offer positive carry.