Experts at Wong & Partners, member firm of Baker McKenzie in Malaysia, take a detailed walk through latest regulatory and tax developments in the Southeast Asian country, touching on the kind of fine details that wealth managers dealing with the jurisdiction must understand.

The editors are pleased to share this guidance and of course, the usual editorial disclaimers apply to guest material. To contact the editors, email tom.burroughes@wealthbriefing.com and jackie.bennion@clearviewpublishing.com

1. Malaysian Budget 2020
The Malaysian Budget 2020 was unveiled on 11 October 2019 by the then Finance Minister, YB Tuan Lim Guan Eng and was later legislated into the Finance Act 2019 (gazetted on 31 December 2019) ("Finance Act"). We have set out below the key legal and tax updates arising from the Budget and other developments that are pertinent to the wealth management industry.

The Finance Act also increased the flat income tax rate for non-resident individuals from 28 per cent to 30 per cent, with effect from YA 2020.

Under the Stamp Duty (Remission) (No. 2) Order 2019, the Remission is now restricted to transfers where the recipient is a Malaysian citizen. This new restriction applies to all instruments of transfer executed on or after 1 January 2020.

c. Changes relating to Real Property Gains Tax ("RPGT")
Amendment of the categories of disposers for RPGT purposes
The Real Property Gains Tax Act ("RPGT Act") was amended on 31 December 2019 to differentiate categories of disposers, i.e. between companies incorporated in Malaysia and those incorporated outside of Malaysia. Such amendments effectively increased the RPGT rates applicable to foreign companies (as disposers). The new RPGT rates are reflected below: 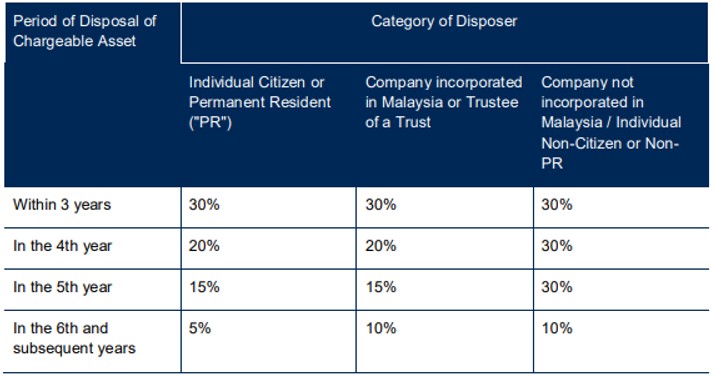 Following the amendments to the RPGT Act, this retention sum is increased from 3 per cent to 7 per cent where the disposer is a foreign company.

The Tug Of War For Trustees In Divorce

Estate Planning: Why Are Digital Assets So Tricky To Deal With?

Protecting The Client: The Fast-Growing World Of Online Reputation Management