This news service is proud to unveil a major new report on the external asset manager sector in Asia, the second time it has partnered with UBS to explore this industry.

The second report on external asset managers in Asia (see the previous report here) by the publisher of this news service drills into this growing sector both in the powerhouses of Singapore and Hong Kong, and in emerging markets like Thailand and the Philippines - pulling out a wealth of clues as to where the EAM sector is heading, and how custodian banks might look to win their business.

In this feature, we outline how the ecosystem enabling the EAM model to flourish is evolving in the region and trace the progression of this nascent market from how it looked last year.

As with any wealth management market, External Asset Managers in Asia-Pacific form part of a far broader ecosystem of financial services providers, whose growth and future evolution is a function of the addressable market. The wealth available to be managed in the region, the openness of authorities to this activity and client demand all bode very well for Asian EAMs in the years ahead – that is the over-riding message of our second annual report on this topic, External Asset Managers in Asia – New Directions for a Rapidly-Expanding Sector.

According to Capgemini, Asia-Pacific overtook North America in hign net worth wealth terms for the first time in 2015, and ultra-high net worth individuals in Asia-Pacific expanded their ranks and wealth more quickly than all other wealth bands. The fact that Asia-Pacific wealth is tipped to surpass $42 trillion by 2025 explains why the region is such a priority for global wealth managers and recent industry research has also highlighted the growth prospects of “Emerging Asia”: Thailand, India, China and Indonesia are expected to be powerhouses in the expansion of Asia-Pacific’s HNW population over the next decade, fuelling annualised growth of 12.6 per cent.

The maturation of the Asian market, pressure for outperformance and demand for highly-specialised investment offerings put EAMs - with their “open architecture” approach - in a strong position to garner market share. The appeal is also strong for entrepreneurial bankers seeking new career progression routes, as well as for end-clients.

“There are some experienced and knowledgeable senior private bankers - who have been in the industry for a long time and have great client connections - who are looking into opportunities to expand their career and take it to the next level. Increasingly, they see the EAM business as one of their top choices for further career development and a logical next step,” Winnie Lee, Managing Director at UBS, told the report’s author, Wendy Spires.

Higher barriers to entry notwithstanding, Asian external asset managers are overwhelmingly positive on their sector’s growth in terms of new business launches: 77 per cent of the 2017 cohort see the number of new EAMs in their location increasing over the coming three to five years.

The report also confirms that Asian wealth hubs are seen as strong global contenders, with international clients taking centre stage for EAMs. Almost nine in ten respondents believe their location is a politically and economically stable centre for global financial assets, and over nine in ten are serving international clients to at least some degree (for a great many they are a main revenue source).

In order to grow effectively, contributors highlighted long-lasting, trusted relationships as the bedrock of the EAM value proposition (voted the most important element by 47 per cent of respondents). Expertise of investment advice also figured highly on this metric (35 per cent of the votes), but 9 per cent emphasised best execution and efficient processes, underscoring just how important up-to-date technology and efficient systems are across EAM business models.

Our conversations with independent advisors highlighted clients’ desire to tap into “broad and deep investment expertise”, including a wide range of alternative products, as being  paramount: when asked to name the top products used by clients, Asian EAMs ranked equities convincingly at number one with 74 per cent of the votes, yet alternatives also figured highly, notably structured products (33 per cent), hedge funds (17 per cent) and private equity (13 per cent).

Another stand-out finding is just how much variation in EAM revenue streams and fee models is in evidence. Performance fees are also rising in importance, with our experts predicting a reduction of commissions to allow for performance fees to come more to the fore, especially in the emerging markets outside of Singapore and Hong Kong; almost a third of respondents include a performance fee as part of their management fee and in nascent centres this figure rises to 50 per cent.

With just under a fifth of participants having been in business for less than two years, most firms in our study categorise themselves as “traditional EAMs”. However, interesting regional variations were also seen, with single and multi-family offices making up almost three in ten firms (respondents in Hong Kong lean towards the multi-family office style and those in Singapore tend to be “traditional” EAMs). Many firms are optimistic of evolving into larger EAMs within five years (37 per cent), with half of those in emerging markets taking this route.

In terms of actually choosing their custodian bank, three-quarters of firms pointed to quality of service as their biggest consideration (ahead of technology and reputation). That said, while sub-optimal technology platforms and interfaces may not be EAMs’ biggest pain point when working with custodians, inadequacies in these areas are still a significant area of concern, and many of our experts see technology provision as the real battleground for external asset manager business as competition heats up.

Our study also highlighted that onboarding is an even greater pain point now than previously (48 per cent cited this as a severe problem last year, compared to 71 per cent today), while the pricing of custodian services has more than doubled in importance since 2016 to now stand second in EAMs’ rankings of top concerns (36 per cent compared to 17 per cent). So, while pricing may not vary hugely in Asia currently, EAMs are likely to be focusing on even small differences more and more - particularly as fuller fee and cost disclosure to clients comes into view.

External Asset Managers in Asia – New Directions for a Rapidly-Expanding Sector is a 40-page report, based on a survey of 78 Asian EAMs and interviews with over 20 industry experts to illuminate its findings. Access to the report is free for WealthBriefing subscribers (and triallists) as part of their member benefits. To download your copy, complete your details below. 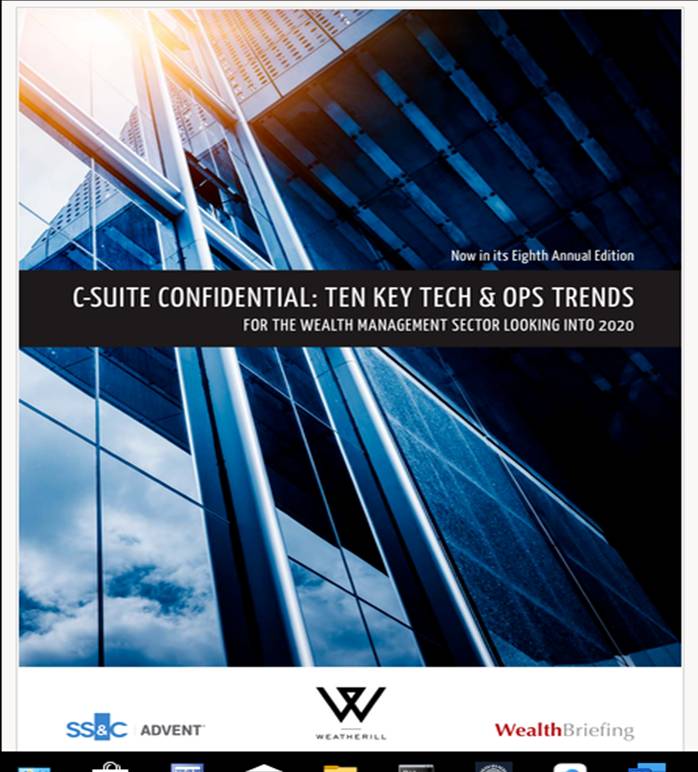 Wealth Management Rises At DBS In 2019